Like everyone else this week, my Instagram feed has been filled with black and white images of women accompanied by the hashtags #challengeaccepted and #womensupportingwomen. I have been asked by many to participate in the challenge but have spent the last 48 hours tied up in knots of confusion and frustration, trying to unpack how I really feel about this campaign. Why? Surely it is a nice, positive, harmless campaign that supports women? Well, I’m not so sure. Let me explain. 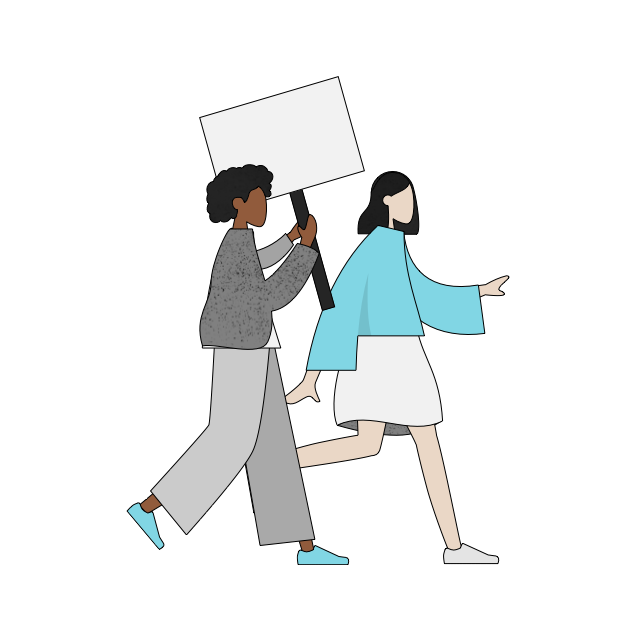 While there are clashing narratives over the challenge's true origins, and the challenge itself has resurfaced in various manifestations over the years, we need to be clear on a few facts:

In Turkey, the #challengeaccepted hashtag represents an outcry against the brutal murder of 27-year-old Kurdish student Pınar Gültekin by a former partner. This combined with the fact that some Turkish officials have expressed interest in pulling out of the Istanbul Convention, a treaty by the Council of Europe that fights for an end to violence against women, despite Turkey having some of the highest rates of femicide in the world.

The idea of sharing a black and white photo of women to show support for Turkish women made sense because when women are killed in femicides, it's often black and white photos of the victim that are shared across media channels. Those original hashtags—#kadınaşiddetehayır and istanbulsözleşmesiyaşatır—roughly translate to “Say no to violence against women” (kadına şiddete hayır) and “Enforce the Istanbul convention” (Istanbul sözleşmesi yaşatır).

They have since been buried under the flood of black and white photos of women with the accompanying #womenempowerment and #womensupportingwomen hashtags – the large majority of which don’t appear to engage with, nor be aware of, the meaning of this current movement. I stand in solidarity with women in Turkey and around the world in calling for an end to violence against women and accountability for perpetrators (usually men known to the victim). However, I do wonder about this strategy.

You see, the very idea that we need to loudly proclaim that women support women, stems (at least in part) from the toxic tool of pitting women against each other. The idea that women do not support women is a myth propagated by the patriarchy. Don’t buy into it. Women have always supported women and will continue to do so.

Violence against women, an epidemic, is also a tool of the patriarchy, and women are at greater risk than ever because of COVID-19. Family violence reports in Victoria are the highest on record, up 6.6% on last year, to almost 85,000.
Global estimates indicate that 35% of women worldwide have experienced physical and/or sexual violence in their lifetime. In 2017, an estimated 58% of female victims of murder globally were killed by an intimate partner or member of their own family, amounting to 137 women every day. That is over 50,000 per year. This is a problem in every country on earth, in every community, and every neighbourhood. In your neighbourhood.

Sit with that for a minute. Let it sink in.

I know it is difficult and heartbreaking. But this is the reality and we should feel uncomfortable. We should be outraged.

And while I refuse to sit in despair, and I recognise our need for hope and positivity, particularly at a time like this, I know that the solutions to the deeply rooted problem of violence against women, is not a performative black and white photo that has been co-opted and depoliticised. It’s vital that we engage in these issues, but true engagement requires more than Instagram allyship. It requires us to ask what does change look like and how do we actually drive that change?

So, what should we be doing?

Listen to, centre and amplify the voices of those embedded in these movements and leading this work. Diversify your news sources.

Call out sexism. Show up. Have hard conversations with friends, family and loved ones. Yes, it’s uncomfortable, but that’s how we grow, learn and make progress.

Be intersectional. In order to truly tackle gender inequality, we have to confront all forms of discrimination and oppression - such as racism and ableism, amongst many others.

Advocate for accessible spaces. When hiring a space, creating a workspace, building an online space and so on, think about who can access it. Prioritise accessibility for people with disabilities and think about how you can make these spaces not only inclusive but welcoming.

Show up online and in person when it’s safe to do so. Join rallys, protests and movements calling for gender equality and an end to violence against women.

Have conversations about healthy and positive consent with friends, family members and loved ones. Consent should be freely-given, retractable, informed, enthusiastic and specific (FRIES).

Challenge gendered stereotypes with the children in your life. Start with the toys they play with – children should be encouraged to play with whatever toys they like without attributing gender to them (i.e. trucks are not just for boys and dolls are not just for girls). When shopping for clothes, try to buy gender neutral clothing or clothes with bold and positive messaging that don’t reinforce gender roles (i.e. avoid the “daddy’s little princess” tee shirts). Use the right terminology with children – from body parts to how you praise them, be direct and gender neutral where possible.

Vote for leaders who take action to advance gender equality

If you’re in a financial position to do so, donate to women’s rights organisations including women’s shelters and encourage others to do the same.

If someone you know is struggling or you suspect they may be experiencing violence, ask them if they’re ok. Let them know you are there to support them, and that it is safe to talk to you, whenever they are ready.

If you or someone you know is experiencing violence, please seek help via 1800RESPECT.

There is absolutely nothing wrong with sharing a photo of yourself and celebrating the women in your life. Social media movements or challenges can be transformative and revolutionary. But they must be coupled with further action.

Ending violence against women demands long-term, bold, systemic change by individuals, organisations, communities, and governments. That is the real challenge we must all rise to.

Back to Blog
Next